In the summer of 1960, before the John Birch Society reached its 100,000 member milestone, disaster struck. A secret book that was never supposed to be read beyond a small, select group of men (like my dad, William Buckley, Fred Koch, and Barry Goldwater), became public.

In his book, titled “The Politician,” Welch reached this conclusion:

“My firm belief that Dwight Eisenhower is a dedicated, conscious agent of the Communist conspiracy is based on an accumulation of detailed evidence so extensive and so palpable that it seems to me to put this conviction beyond any reasonable doubt.”

Welch didn’t stop there. “There is only one possible word to describe his (Eisenhower) purposes and actions. That word is treason.”

In 1960, calling the President a traitor was a very big deal. It would be like calling our president a secret Muslim and an Al Qaeda operative.

My Father and the Book

My dad had a lot to do with the uproar over the manuscript. He’d denied its existence for some time, but in July of 1960, after he’d repeated that “there is no such book,” at a large JBS recruiting meeting, a member of the audience pulled a copy out of her satchel and read the passages I just quoted.

My father tried to regain control with one lame excuse after another until the 200 plus people in the audience laughed him off the stage.

This debacle was witnessed by Jack Mabley, a well-known reporter for the Chicago Daily News. In two columns, Mabley described Welch’s book and my father’s responses. The columns were picked up in newspapers across the country. The Birch Society found itself at the center of a firestorm that lasted for years.

During the uproar, my father agreed to a LIFE magazine photo-journal story about the Birch society. The center piece of the feature was a picture of Birch members saluting the flag.

I was the youngest person in the photo, and my face has become part of that iconic image of right-wing politics in the 1960s. I was 15 and I hated the picture.

Fallout from the “President Eisenhower is a Communist” scandal drove the Republicans to reconsider their enthusiastic embrace of the Birchers.

Suddenly, prominent GOPers and respected Conservatives—like Richard Nixon, Bill Buckley and National Review and even Senator Barry Goldwater denounced the Birchers. By the middle of the 1970s, Birchers had been drummed out of the GOP and exiled to the lunatic fringe with the KKK, the Aryan Nation and a whole assortment of kooks and crackpots.

Everyone breathed a sigh of relief—the John Birch Society would be a footnote in the history of right wingery. Any idea that Birchers would ever have any impact on American politics was labeled insane.

New Allies in the old Confederacy

While the GOP wiped their hands of the Birchers, the leadership of the society looked to the South. It was the middle of the 1960s and the white citizens of the former Confederacy were growing terrified of their “coloreds” and the growing civil rights movement. The Birchers took advantage of the fear and labeled Dr. Martin Luther King as a Communist.

According to Robert Welch, Birch founder, court-ordered integration of the schools would lead to a permanent police state. The Birchers attacked African- Americans as agitators, revolutionaries, and thugs. Birchers scared a whole lot of citizens with the revelation that the Communists had formulated a plan to form a Negro Soviet Republic right in the heart of the South.

These Birch messages took root. All across Dixie, the Birch society flourished.  By 1965, 100 John Birch Society chapters were operating in Birmingham, Alabama. In Chicago, a city 4 times larger, there were 25 chapters.

Turning Into a Bleeding-Heart Liberal

The anti-civil rights message, a touchstone for the Birchers for years, caused my first separation from my parents and their Birch ideology. I believed that African Americans should have the same rights I did. It was that simple for me.

My parents were furious when they realized that I opposed them on this issue. Facing down their disapproval and their threats scared me. But, in that process I learned something big: I had my own ideas and my own voice. It was tiny and squeaky, but it worked.

“You better be careful,” my mother told me. “You’re turning into a bleeding heart liberal.”

A Long Walk to No

For the next twenty years, I struggled to break away from the fanaticism of my parents. I vacillated from “going along to get along” to trying to persuade them to consider other viewpoints. Finally, I said a definite, absolute, loud NO.

Mother and Dad could not accept that their oldest daughter had forsaken their ideas.

“You’re a traitor to your parents and to your country,” my mother told me.

For my parents, all government programs that helped the poor were unconstitutional and had to be repealed. But, they went even further. They embraced the idea of healthy poverty that Robert Welch championed.

Welch wrote this about America in 1900. “There were pockets of poverty, but it was a healthy kind of poverty, where every man took for granted that relief from dire want was entirely his own problem and responsibility. . .. And even the poverty was thus offset by the enormous blessing of freedom.”

Over the years, when my mother was angry with me, she’d remind me that all socialist-liberal policies would eventually fail. She always added, “Our day will come. And we will be ready.”

For years, I dismissed Mother’s comments. I couldn’t even imagine that she was on to something.

The Birch Society had been reduced to irrelevance, but Birch ideas lived on. A group of very wealthy men—men who had been leaders of the Society or influenced by Birch ideas—used their wealth to seed think tanks and tax-free foundations.

Before too long, the Insiders in the Council on Foreign Relations and their minions were countered by the new right-wing kids on the block: The Heritage Foundation, The Cato Institute, American Legislative Exchange Council, (ALEC) Americans for Prosperity, the Club for Growth, the National Rifle Association, the American Enterprise Institute and the Tea Party.

In addition, the Religious Right set up scads of tax-exempt operations and foundations almost too numerous to count. The right wing recruited politicians to policy seminars while writing model legislation for state and federal government.

My parents played a small part in this movement when they founded and funded the Wanderer Foundation, a right-wing Roman Catholic group. But, my mother and dad never had big money to invest.

One big time Birch family, the Koch family, has spent huge sums to bankroll Birch ideas. David and Charles Koch, the sons of Fred Koch—one of the original founding members of the Birch Society and a friend of my father—have invested astonishing amounts of money in their favorite political causes.

2010 and 2014 were the first waves of a Koch tsunami intended to defeat all Democrats and build a permanent GOP majority in the House and Senate. The Supreme Court’s Citizens United decision declaring that money equals speech has helped to fuel this juggernaut.

When you strip away all the trappings, the Koch Brothers and their allies propose the identical ideas I heard from my father and his Birch allies: this is an unholy marriage of radical libertarian economics in the Ayn Rand model and a regressive, unrelenting culture war.

Put it together and you have exactly what the Birchers longed for: a dismantled safety net, a federal government 40% of its current size and a free-for-all, laissez faire economy where the rich pay no taxes, business has no regulation and the workers have no unions.

The government will be tiny, but what is left will control our personal life, our sexual preference, our fertility, our civil rights and our right to vote.

Welcome to the right wing future.

Wrapped in the Flag is My Story

The 2010 election brought a huge Republican majority to Congress. The 2014 election gave the Republicans control of the Senate. For a country that had twice elected a Democratic president with a significant margin, it was a stunning lurch to the right.

A whole lot of people were amazed.  I was not among them.

I recognized the anti-government rhetoric and the unlimited money and I realized that Tea Party had locked arms with libertarians, big business, the religious right and the John Birch Society. This was a potent coalition of ideology, money and power—a coalition fifty years in the making.

Because most Americans have no idea that these “new” ideas are the same “old” ideas that the John Birch Society preached fifty years ago, I wrote my story. And, five years after the first agent said no one would publish my book, Beacon Press proved her wrong.

My award-winning book—Wrapped in the Flag—is available in hardcover, paperback, ebook, and Audible versions. 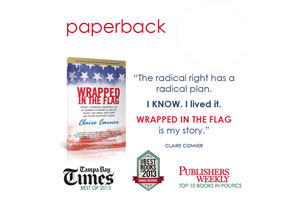 Go Deep Inside and Connect the Dots

In my book, you’ll go deep inside the John Birch Society where conspiracy theories abound and the federal government is enemy #1.You’ll meet a rogues’ gallery of men who built the Birch Society. From Robert Welch, the Birch founder, who was a frequent guest in our Chicago home to Revilo Oliver, a professor at the University of Illinois, and the vilest anti-Semite, pro-Nazi man I’ve ever met.

You’ll learn about Fred Koch who made his fortune building power plants for Joseph Stalin, took almost 30 years to denounce what he saw there, and then dropped a small fortune fighting labor unions.

You’ll follow me to Dallas in 1963 and meet General Edwin Walker, the Bircher’s favorite general. You’ll stand with me on Main Street while I watch John Kennedy’s motorcade creep toward Deally Plaza and a waiting Lee Harvey Oswald.

You’ll meet John Schmitz, a John Birch Society council members and congressman who ran for President on the American Party ticket and was drummed out of the Birch Society for bizarre comments and erratic behavior. Scandal overtook him when he was discovered to be a bigamist—with two secret children.

You’ll encounter Thomas Stockheimer who ran for the Wisconsin Assembly on the American Party ticket and while working to organize a taxpayers’ revolt that morphed into the Posse Comitatus—a 1970s militia group who was connected with Terry Nichols (Oklahoma City Bombing ).

You’ll share my struggle as I figure out that I can not and will not follow in my parents’ footsteps. You’ll stand with me as I make my last trip to Wisconsin to bury my mother. You’ll realize that our current political mayhem is the doing of the radical right. And you’ll realize, as I do, that all of us have to get involved in this election season. It is up to us to protect our future from the radicals who want to take the country back.

Take a few minutes to listen to me talk about the John Birch Society and the Civil Rights Movement.