On Wednesday, November 16, 2011, Lauren Pierce, the president of the College Republicans at the University of Texas, Austin tweeted a little “joke.”

“Y’all as tempting as it may be, don’t shoot Obama. We need him to go down in history as the WORST president we’ve EVER had!”

I recoiled in horror at her words.

This young woman with her Texas y’all and her Texas ha-ha is too young to remember November 1963, and all that led to that terrible day. And, it seems, she is too invested in hating President Obama to even care. If I could, I’d drag her back in time to Dallas, Texas, November 22, 1963.

Lauren could stand next to me and wave as the presidential motorcade makes its way down Main Street toward Dealey Plaza. She could step off the curb onto the face of John Kennedy on a “Wanted for Treason” poster and worry with me that my father might have written it. 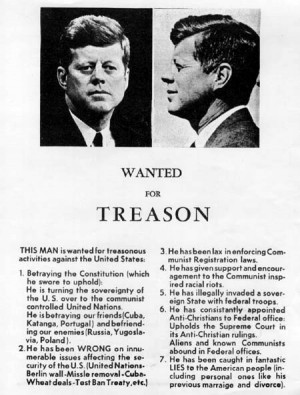 She could read the somber reflections and the black-wrapped editorials in the Dallas papers the next day. Lauren could weep with me and my roommate as little John Kennedy honors his father with a final salute.

She could listen to my father, back home in Chicago, remind me that “the Communists killed one of their own.”

Maybe, just maybe, Miss Lauren Pierce would take to heart what the Dallas Morning News said on November 23, 1963: “We join the rest of the nation in expressing heartfelt sympathy and trust that the warped and distorted who become unstable in their opposition (to Kennedy) will retreat into the darkness and not emerge until they regain the light of reasonableness and balance.”

The day before President Kennedy arrived in Dallas thousands of these handbills labeling Kennedy a traitor appeared in downtown Dallas. At the time, I was a college freshman at the University of Dallas, a small conservative college just outside Dallas.

My father, Stillwell J. Conner, a John Birch Society National Council member and Birch spokesperson, had attacked Kennedy as a Communist for four years. When I saw the poster on the street in Dallas, I worried that my father and his John Birch friends―friends like Fred Koch, General Edwin Walker and Robert Welch—had a hand in it.

Months later, the Warren Commission identified the creator of the poster as Robert Surrey, a right-wing Dallas activist and associate of Major General Edwin Walker, a prominent John Bircher who lived in Dallas. Money to print the flyer moved through the Dallas leadership of the John Birch Society. Despite the connections outlined in the Warren  Commission report, my father never acknowledged the existence of the handbill or any Birch connection to it.

When I mentioned it, I was told to “stop telling tall tales.”

About Dallas in the 1960s when it was a hotbed of the John Birch Society and other far-right groups  . . .

Here’s a new book by Edward H. Miller, “Nut Country: Right-Wing Dallas and the Birth of the Southern Strategy”

If you want more, there are thousands of articles and books about John Kennedy’s assassination

I am a right-wing survivor. Thanks to my radical parents, I became a first-hand, in-the-room witness to the fear, paranoia, and hate unleashed by the radical John Birch Society. Over years, this perspective helped … END_OF_DOCUMENT_TOKEN_TO_BE_REPLACED

The president of the United States is an angry man. No matter how much money he has; how much power he grabs; or how many people kowtow before him, he's a blink from a … END_OF_DOCUMENT_TOKEN_TO_BE_REPLACED

Readers, Writers, and Commentators rave about Claire Conner and Wrapped in the Flag "Claire Conner knows of what she speaks. She was … END_OF_DOCUMENT_TOKEN_TO_BE_REPLACED

Don't miss The Brainwashing of My Dad by Jen Senko, now in theatres and on … END_OF_DOCUMENT_TOKEN_TO_BE_REPLACED