The Republican Party has devolved into an unruly and dangerous coalition of political extremists, anti-government libertarians, right-wing billionaires, Neo-Nazis, White Supremacists and Christian zealots with Donald Trump as their great and powerful leader.  When this gang is finished, America will look like the early 1900s–those “good old days” when the federal government was tiny, workers had no protections and no safety net, and the wealthy had it all. 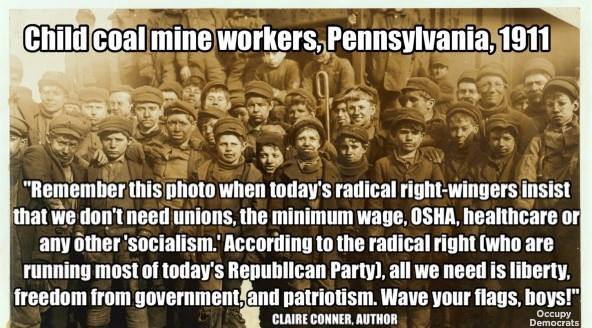 Donald Trump did a phone interview with the New York Times on Thursday. The transcripts of the conversation reveal a man who knows little about foreign policy and cares less about the consequences of his pronouncements.

Toward the end of the interview, the Times asked when American power was at its peak. Here’s his answer directly from the transcript:  “No if you really look at it, it was the turn of the century, that’s when we were a great, when we were really starting to go robust. But if you look back, it really was, there was a period of time when we were developing at the turn of the century which was a pretty wild time for this country and pretty wild in terms of building that machine, that machine was really based on entrepreneurship etc, etc.”

So, Donald Trump loves 1900. And, why not? This was the Age of Robber Barons.

Best of all, for folks like Trump, the government was tiny, there was no IRS, and no one paid income taxes. Oh, yeah! Those were the good ole days.

Donald Trump has company in loving the 1900s.

The founder of the John Birch Society, Robert Welch, who wrote extensively about American history (his version of it), heralded the 1900s as the golden days of the United States.  “The spirit of growth, of adventure, and of opportunity permeated the very atmosphere which everybody breathed,” he wrote.

He went on: “The spirit of growth, of adventure, and of opportunity permeated the very atmosphere which everybody breathed,” Welch wrote. “There was still plenty of poverty in many areas, of course. But, it was a healthy kind of poverty, where every man took for granted that relief from dire want was entirely his own problem and responsibility.  . . . And, even the poverty was thus offset by the enormous blessing of freedom.” (John Birch Society Bulletin, July 1976).

Welch did admit that there were necessities of life. “While food, shelter, and clothing are necessities for an individual in a civilized community, the guarantee that he will always have them is not (a necessity).”

For the last three years, I’ve been told — by too many well-meaning liberals — that the old radical right is long gone. Their ideas are just as dead as their bodies. I so wish this were true.

Donald Trump let the cat out of the bag. He’s just as radical, just as backward looking, and just as dangerous as the old John Birchers who stoked extremism in the 1960s and 70s.

Let’s not be fooled. The radical right is back and they are one election away from controlling the country.