You are here: Home / abortion / The GOP Will Ban All Abortions, No Exceptions 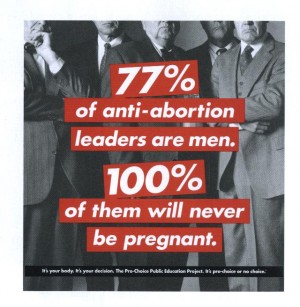 The Republican Party Supports an Absolute Ban on Abortion. If that isn’t punishing women, what is?

Donald Trump did a bad thing yesterday. So bad that the entire GOP is racing as far away as possible from their front runner. What happened?

Here’s the awful thing Trump did. During an interview with Chris Matthews, Trump said that women who have abortions should face some punishment if Roe v Wade is overturned and abortion is once again illegal in the United States.

Republicans and “pro-lifers” are falling all over themselves to pretend that they are never, ever, cross-our-hearts, going to punish women who have abortions. Pundits claim that Donald’s “mistake” proves he doesn’t understand the “real pro-life movement.”

The Goal of the Pro-Life Movement

That so-called “real” pro-life movement has been perfectly clear about their goal. They are in the business of seeing that Roe v Wade is reversed, abortion is made illegal or broadly restricted. The so-called “real” pro-life movement is just fine with imprisoning any doctors who bypass the law and perform abortions. Women will be spared prison, but they won’t be spared the nightmares of rape, incest, health issues, ectopic pregnancies, and birthing babies with anomalies incompatible with life.

No matter how fast the Republican party abandons Trump, the GOP is all in with the goals of the “real” pro-life movement. In 2012, the platform of the party supported an absolute ban on abortion without any exceptions.

While pro-lifers and the GOP wait for the Supreme Court to overturn Roe v Wade and reinstate a nationwide ban on abortion,  they are doing anything and everything they can to restrict access to abortion. Since 2010, hundreds of laws have been passed that have made it more and more difficult for women to have abortions.

Among the new restrictions are:

Ted Cruz, who hopes to benefit from the Trump tumble, said this, “”I am pro-life. Being pro-life means standing and defending the unborn. But it also means defending moms . . . And Donald’s comments, they were unfortunate, they were wrong and I strongly disagree with it.”

This is how Cruz defends those moms. He refuses to support any abortion exceptions including rape, incest, and even the health of the mother.  Cruz is in favor of the “Life at Conception Act” that would ban all abortions  and give “personhood” to a fertilized egg. Cruz wants Planned Parenthood defunded. He believes that specific methods of birth control including “the pill” and the IUD are forms of abortion and should be illegal.

John Kaisch, who presents himself as a reasonable, compassionate alternative to both Trump and Cruz is a firm abortion opponent. In June 2013 the Ohio governor signed into law a bill to ban most abortions after 20 weeks of pregnancy allowing an exception only if the life of the mother is in danger. The same legislation cut funding to Planned Parenthood and also required women to undergo an ultrasound before getting an abortion.

But, They Insist They Aren’t Trump

The GOP and the “real” pro-life movement is trying desperately to convince American women that they aren’t Donald Trump. Oh no, they’re just so kind and loving, compassionate and supportive. Never mind that you’ll be carrying your rapist’s baby. Forget that most severe fetal anomalies are not diagnosed until the fifth month of pregnancy. Don’t worry, you wont’ miss those evil forms of birth control that are really little abortions. And please, don’t fret that your daughter’s ectopic pregnancy could cause her death. And remember this, when the Supreme Court finally rids us of all abortions, it will be a new day in America. You’ll either love it . . . or else.

I was a leader in the pro-life movement for over 12 years. I write about my journey to choice in “From Pro-Life to Choice.” Click the link below to read my story.

From Pro-life to Choice

I am a right-wing survivor. Thanks to my radical parents, I became a first-hand, in-the-room witness to the fear, paranoia, and hate unleashed by the radical John Birch Society. Over years, this perspective helped … END_OF_DOCUMENT_TOKEN_TO_BE_REPLACED

The president of the United States is an angry man. No matter how much money he has; how much power he grabs; or how many people kowtow before him, he's a blink from a … END_OF_DOCUMENT_TOKEN_TO_BE_REPLACED

Readers, Writers, and Commentators rave about Claire Conner and Wrapped in the Flag "Claire Conner knows of what she speaks. She was … END_OF_DOCUMENT_TOKEN_TO_BE_REPLACED

Don't miss The Brainwashing of My Dad by Jen Senko, now in theatres and on … END_OF_DOCUMENT_TOKEN_TO_BE_REPLACED