You are here: Home / anti-government / Trump and the Radical Right Control US Now. Who Will Resist? 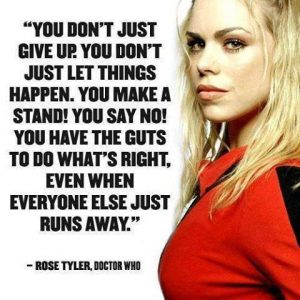 The moment Donald Trump descended from his gilded tower and anointed himself as the savior of the United States, I worried. While the press, the Democrats, and most Republicans had a good laugh, I read right-wing websites. I knew Trump had a rabid following. While the left laughed, Trump took over the radical right and the Republican Party.

The longer the campaign dragged on, the more uneasy I became.

I shared my fears. Friends told me I was over-reacting. They insisted that right-wing radicals could never take power. And that Trump was too stupid, too silly, too ridiculous to win. Plus, of course, millions of Republicans would never vote for the man.

As election results rolled in, my phone started ringing. “What the f— is happening?”  “How did you know this was coming?” Several people were angry that I hadn’t done enough to sound the alarm.

I wanted to scream.

I’ve spent years telling my story of growing up in America’s radical right. I outlined how today’s GOP had adopted the ideas the John Birch Society preached in the early 1960s. I wrote a book about my life—Wrapped in the Flag (Beacon 2013) and spent thousands of my own dollars traveling across the country sharing my personal experiences. I did hundreds of radio interviews. I posted blogs, wrote Tweets, made videos, contacted every person I could think of. No matter, I never landed an interview with Thom Hartmann. Rachel never called. The PR person at Beacon could never get a response from anyone.

I was told that the John Birch Society was a footnote in history. People laughed at the idea that they’d ever have any real impact on our government. As you can imagine, my book was never a big seller.

After Trump’s election, I was sure people would be more interested. After all, most liberals have no idea how the radical right thinks and what they want. I had a unique position: I was a witness to the thoughts and plans of the most extreme right-wingers.

I contacted my publisher about writing another book digging into the conspiracy theories, anarchist ideas, and religious extremism that drives the radical right and the Republican Party. I was told (I kid you not) that there was no interest in such a book. The reason, in their own words, “the thing you warned about has come to pass and the extreme right nature of the Republican Party –and especially this administration– is now on full display.”

Really? So liberals don’t need to understand how we got here and what to do now?

Even today, Americans and the “liberal establishment” keep telling themselves that Trump won’t do what he said he’ll d do. Somehow, the mantle of power will force him to be more presidential. The Republican Party will temper his tantrums and his bullying. He’ll learn to respect our friends (like Mexico) and stand up to our enemies (like Putin). Trump will respect the rule of law and defend the civil rights of all Americans.

The leadership of the Democrats –including President Obama, Hillary Clinton, and the rest – rationalized that Trump was a fairly elected president. He deserved be treated with the same respect as any other president. The Obama administration did everything possible to make the transition seamless. All of this was to protect and defend our democratic institutions and the peaceful transfer of power. And, of course, we all have to give him a chance.

In the Senate, our progressive leaders are voting for cabinet nominees who are unqualified. (I’m talking to you, Elizabeth Warren and Sherrod Brown. Ben Carson is not prepared. But, you are going to vote for him anyway. ) Where’s the opposition to a cabinet of wealthy plutocrats, military hawks, and radicals who want to destroy the agencies they’re going to head?

The Democrats are caving before the battles are even engaged. They’ve forgotten that the GOP won its majorities because it spent eight years saying no, no, absolutely no to President Obama. Rather than fight, the Democrats have decided to find ways to work with Trump. What are these people talking about?

And Democrats are going to work with this man. How could they?

Too many Americans still don’t understand what radicals want and how they think. It’s time we get this confusion cleared up right now. Radicals say what they mean and they mean what they say. They are not kidding. They are not faking it. They are not speaking to their base. They are telling everyone what they plan.

Take America Back is not just a campaign slogan. The radical right has a destination in mind – somewhere in the good old days around 1900 before the federal government had been infiltrated with progressive, liberal ideas.

The radical right believes that America was created for people like them—primarily white, males who have money. Everything was just dandy until a conspiracy of liberals, atheists, and globalists gained power. Those liberals and their socialist do-gooder pals passed unconstitutional laws, built labor protections, created a social safety net, and expanded civil rights. This kind of government could not be allowed.

The radical right has been plotting, planning, organizing, and propagandizing for decades with one goal in mind: to rip progressive government out at the root. They know how to do this:

These steps worked so perfectly that Trump is the president. 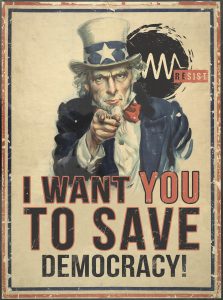 Now we have to step up and stop him. This will not happen unless we start facing facts. Trump is as bad as anyone could be. And he’s worse than anyone thinks.

It’s time to stop pretending that Trump’s presidency will crumble and the radical right will be run out of DC. It’s time to stop imagining some moderate Republicans will break with their party. The GOP will bow down before Trump – even while they laugh at him behind closed doors. They will confirm all of his nominees, and pass his agenda for one simple reason. Donald Trump’s agenda is the GOP agenda. He is doing their dirty work for them.

Donald Trump’s power comes from the GOP’s power. They control 35 states, the House, the Senate, the Executive branch. In a few months – unless Democrats fight a pitched battle and win it—they will cement control of the Supreme Court for decades.

If we want to change this situation, we have to push our Democrats in the Senate and the House to say NO to every Trump appointment, every Trump nominee, and every Trump initiative. Until the Dems discover a backbone, we will continue to bleed support and lose elections. Until the Dems drop courtesy and learn to fight, we will live in the minority for a long time. Until the Dems follow the example of women who marched in Washington last week, America will be Trump’s America.

Trump and his henchmen are coming for every bedrock principle of American democracy. When they are finished slashing and burning, we will not recognize our country.

We are in hard times.

I am a right-wing survivor. Thanks to my radical parents, I became a first-hand, in-the-room witness to the fear, paranoia, and hate unleashed by the radical John Birch Society. Over years, this perspective helped … END_OF_DOCUMENT_TOKEN_TO_BE_REPLACED

The president of the United States is an angry man. No matter how much money he has; how much power he grabs; or how many people kowtow before him, he's a blink from a … END_OF_DOCUMENT_TOKEN_TO_BE_REPLACED

Readers, Writers, and Commentators rave about Claire Conner and Wrapped in the Flag "Claire Conner knows of what she speaks. She was … END_OF_DOCUMENT_TOKEN_TO_BE_REPLACED

Don't miss The Brainwashing of My Dad by Jen Senko, now in theatres and on … END_OF_DOCUMENT_TOKEN_TO_BE_REPLACED