You are here: Home / anti-government / Trump and the Radical Right: Making America Hungry, Sick, and Poor 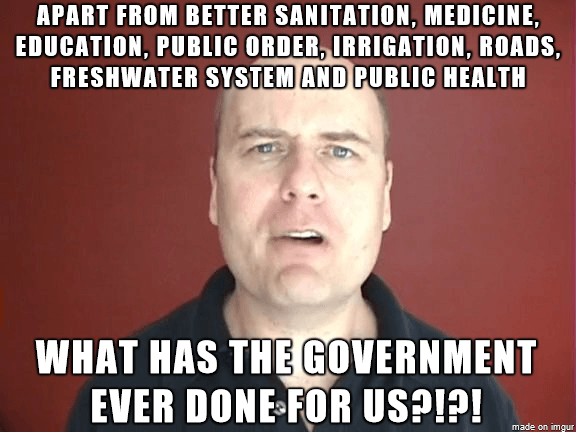 The brains and the money inside the Trump GOP gang have one goal: implementing a radical right-wing, anti-government agenda. It does NOT matter what they call themselves– libertarian, or libertarian-infused conservatism, or conservative with a libertarian emphasis, or movement conservative — they share the same hatred for the federal government.

Why do I say this?

Boil down the Trump administration and the conservatives and you get the same basic principles:

These ideas have been promoted for years by two of the richest and most radical right-wingers: David and Charles Koch. They’ve had company in the DeVos family, the Mercer family, and the Bradley family

David and Charles had their bone-deep hatred of government beaten into them by their father, Fred Koch, one of the original founding members of the radical right, anti-government John Birch Society. Birch doctrine declares that the federal government is essentially evil and requires that every single progressive program passed since FDR be eliminated. They don’t stop there. They demand the dismantling of our central bank and a return to the gold standard. They insist that everything the federal government does that is not specifically defined in our constitution is illegal. To put this in perspective, the John Birch Society says that our federal government can only do FOUR things:

If the Birch agenda were implemented, most of the federal government would be dismantled, sold-off, and privatized. It’s not a surprise that the vast majority of Americans don’t buy these radicals ideas.

Realizing how unpopular their ideas were, the Kochs took a different tack. They decided to create the changes they wanted by building a vast, powerful political network. Their web of foundations, think tanks, and political organizations worked for decades to make their anti-government and anti-tax ideas palatable to Americans. The Kochs have succeeded. Today, a large majority of Americans hold negative views of the government.

“Waste, fraud, and abuse” and “out-of-control spending” are the mantras of the anti-government crowd. They’ve pushed for tax cuts and then more tax cuts regardless of the impact on the economy. While this was going on, the Kochs and their GOP friends grabbed every kind of government welfare including tax cuts for the wealthy, tax benefits for their corporations, government contracts pulling in billions for their industries, and a host of other “deals.”

While the Kochs and their wealthy friends have grown rich beyond measure, most American families have not shared in the largesse. Despite this, these people continue to push the same ideas: tax cuts, cutting the safety net, cutting regulations, and more tax cuts. It’s more of the trickle-down fiction that has been the backbone of every single GOP president from Reagan to Trump. And, let’s not forget, this is libertarian gospel. It’s also the gospel of the GOP.

Unfortunately for all of us, America jumped a ride on the Trump train. What we’re about to get is a country run by the GOP anti-government gang with a bully, would-be dictator in the White House.

Imagine our country when the GOP is finished. We fell for the nonsense, again.  Now we’ll get to learn the hard way that smashing the government has costs and rich folks will not be paying them. 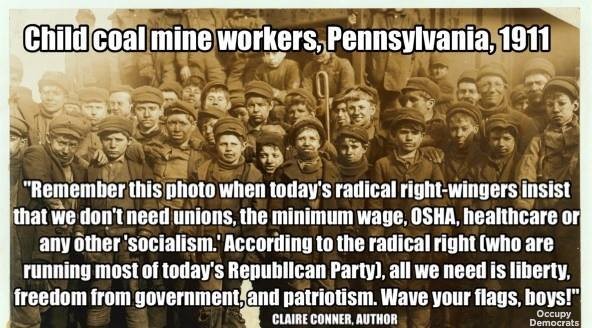 To read about the history of Libertarians: http://claireconner.com/wp-admin/post.php?post=3119&action=edit

I am a right-wing survivor. Thanks to my radical parents, I became a first-hand, in-the-room witness to the fear, paranoia, and hate unleashed by the radical John Birch Society. Over years, this perspective helped … END_OF_DOCUMENT_TOKEN_TO_BE_REPLACED

The president of the United States is an angry man. No matter how much money he has; how much power he grabs; or how many people kowtow before him, he's a blink from a … END_OF_DOCUMENT_TOKEN_TO_BE_REPLACED

Readers, Writers, and Commentators rave about Claire Conner and Wrapped in the Flag "Claire Conner knows of what she speaks. She was … END_OF_DOCUMENT_TOKEN_TO_BE_REPLACED

Don't miss The Brainwashing of My Dad by Jen Senko, now in theatres and on … END_OF_DOCUMENT_TOKEN_TO_BE_REPLACED