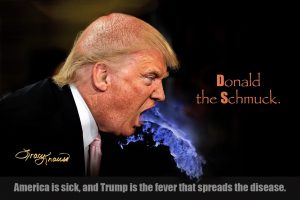 Trump’s conspiracy theories and lies are poisoning America and there is no quick cure. While it is easy to point the big finger at Trump, he’s not the only culprit. He had incredible assistance from the Republicans. To prove the point, look at what the GOP did in the last nine years.

When President Obama took office, our economy was a wreck. We faced not only recession, but the real possibility of a global depression far deeper than the Great Depression of the 1930s. We were stuck in two wars in the Middle East, and our treasury had been depleted by three tax cuts that helped pad the pockets of the wealthy, including business man, Donald Trump. None of this was a secret to the leadership in Congress. Despite the grave situation of the country, the GOP decided to do anything and everything to stop the President’s agenda from becoming law.

“No” became their main line of attack. But they also engaged in a “wink-and-nod” to radical right-wingers who constructed a sinister portrait of the new, popular president. The “birther” movement, favorite of conspiracy-loving right-wingers everywhere, claimed that Obama was not born in the United States and thus was not a citizen, much less a legitimate president.

In 2011, Donald Trump vaulted into the headlines when he became Birther-in-Chief. Here’s a short synopsis of Trump’s deep dive into this crackpot conspiracy.

Trump continued to fan the flames of this stuff for several more years. He tweeted that Obama’s birth certificate was a fraud. He hinted that his birth announcement was planted in the Hawaii newspapers. On and on the Trump lies went. Radicals and racists embraced Trump. They made him into a hero for his hatred of President Obama. The GOP establishment was quiet except for the occasional giggle from the leaders. Trump will be Trump they said.

The GOP didn’t go full-birther. But they never put a stop to the controversy about President Obama’s legitimacy to be president. They stood by while over 50% of their party accepted that Obama was not a Christian. They were silent when their base said President Obama was from Kenya. They said nothing when he was called a Muslim, un-American, terrorist-supporting, tax and spending, liberal-socialist-traitor. Their silence gave power to the fever-swamp of Obama hate. Donald Trump took up residence in that swamp. 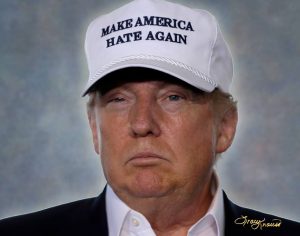 Republicans thwarted President Obama at every turn. Then, they raced around the country claiming that our government was broken. They forgot to mention that they were the ones who broke it. Using this strategy, they grabbed control of the House in 2010 and the Senate in 2014. The new members of the House and Senate were as far right as any group ever elected. Many of the challenged we face today came because of right-wing wins at the Supreme Court. The Congress accelerated the swing to the right by promoting policies that cut the government even in the midst of the recession.

Here are just a few of the right-wing victories in the last few years.

The Republican Party used NO as their gospel for both of Obama’s terms. Any positive improvement in the economy was ignored while all programs that would build infrastructure and employ millions of workers were rejected. Republicans pushed the country to the edge of default, refused to pass budgets or fund the government, and shut the government down. Then, big money right-wingers invented and funded the Tea Party and manufactured a populist uprising against healthcare reform. 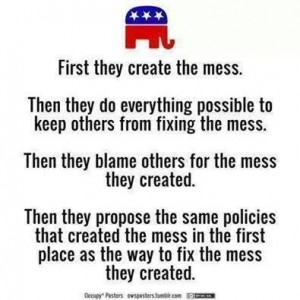 These tactics worked. The GOP base has been in a rage for years. The creature empowered by that rage is now sitting in the White House.

Since being elected, Trump has doubled down on old conspiracies and ginned up a few dandies of his own. On March 4, 2017, in a series of early morning tweets, he accused former president Obama of ordering “wiretaps” in Trump Tower. In his latest version of that lie, he’s dragged the British intelligence service into the fray by saying that Obama enlisted the GCHQ to accomplish the Trump Tower surveillance. Trump has “proven” his claims about the British-Obama conspiracy by quoting Andrew Napolitano, a FOX news analyst and well-know 9/11 truther.

Turn on the news and you’ll hear Donald Trump and his gang of sickos continue to put down America at every turn. From the intelligence service to the State Department, the Trump administration attacks every structure in our government. To hear the President and his cabinet, the United States has been run by fools who know nothing. Our nation is, in their view, falling apart.

Every day these talking points are repeated by Trump’s surrogates. Republicans parrot the same dribble and repeat it to their constituents.

As a child of the radical right, I heard the identical talking points from my father and his John Birch Society allies. It’s hard to say, but it’s true; my father preached the ideas that are poisoning American politics today. These radical right-wing ideas have polarized Americans and threaten our democracy.

Please don’t dismiss Trump and his GOP pals as “politics as usual.” Don’t laugh at his crazy tweets and pretend that somehow, someday he’ll start acting presidential. Don’t assume that a president like Donald Trump will be stopped by the same radical GOP that elected him.

The radical right  has a radical plan for America. That plan is fueled by the paranoia, hate, and fear that fuels Donald Trump and the GOP. Their sickness threatens all of us. If we fail to stop these people, we’ll find ourselves in a country controlled by Donald Trump,  his big-money friends, no-government libertarians, radical Christians, and old John Birchers.

I am happy to report that concerned Americans are awake. All around the country, even in traditionally red states, people are opposing the policies of this administration. Motivated citizens are calling their Congressmen and Senators ever day. Candidates, who’ve never run for office, are jumping into races long considered GOP safe. Newspapers and magazines who fight against Trump have millions of new subscribers.

This energy has the power to slow and then stop the Trump disaster.  It’s a long, rough road, and I’m glad to walk it with strong, smart, determined friends. When I’m tired, I remember this Tshi (Ghana) proverb: “If everyone helps to hold up the sky, then one person does not become tired.”

I am a right-wing survivor. Thanks to my radical parents, I became a first-hand, in-the-room witness to the fear, paranoia, and hate unleashed by the radical John Birch Society. Over years, this perspective helped … END_OF_DOCUMENT_TOKEN_TO_BE_REPLACED

The president of the United States is an angry man. No matter how much money he has; how much power he grabs; or how many people kowtow before him, he's a blink from a … END_OF_DOCUMENT_TOKEN_TO_BE_REPLACED

Readers, Writers, and Commentators rave about Claire Conner and Wrapped in the Flag "Claire Conner knows of what she speaks. She was … END_OF_DOCUMENT_TOKEN_TO_BE_REPLACED

Don't miss The Brainwashing of My Dad by Jen Senko, now in theatres and on … END_OF_DOCUMENT_TOKEN_TO_BE_REPLACED