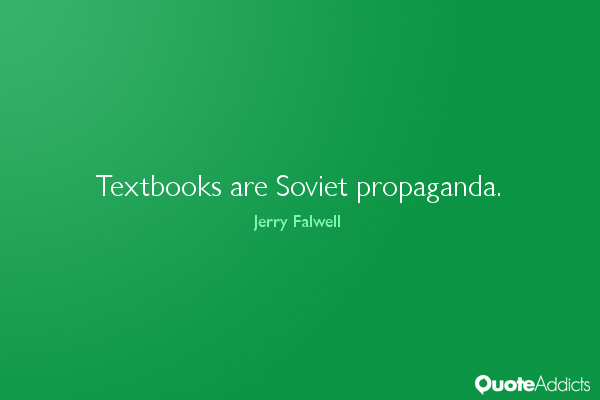 To my surprise, my parents had barely unpacked when they announced a new house rule: my brother and I were instructed to bring our schoolbooks home every day.

“We want to know what you’re being taught,” Mother explained.

“What do I tell Sister?” I asked. “We are only allowed to take workbooks out of the room.”

The next day, when the final bell rang, I grabbed all the books from my desk and dashed to the door. Luckily, Sister was preoccupied; she didn’t even look up as I left the room.

After dinner, Mother sat at her end of the table, hunched over a book. Her eyes moved while she tapped a pencil on the pad next to her. Something stopped her, and she made a note and scratched a line under it.

Dad leaned forward while Mother read to him. “It’s everywhere,” he said.

“Just like Bob Welch told us,” Mother said. “He really is aware of the depth of the problem.”

I kicked the leg of my chair and rested my chin in my hand. My hope for a quick exit from the table had evaporated thirty minutes before.

“Take your elbows off the table and sit up straight,” Mother snapped. “We’re doing this for you.”

“What did Sister talk about today?” Dad asked.

I hesitated. “Nothing much,” I said.

“It wasn’t anything, really. I did learn that farms in Sweden had electricity in their barns before most farms in the US, that’s all.”

Nothing Good Can Ever Happen in a Socialist Country

Traffic whooshed by on Maplewood followed by a sharp honk and a quick screech of brakes. Outside our window, a small crowd of sparrows chirped away in the elm tree. The cuckoo in our clock marked eight o’clock. I yawned.

Mother sighed deeply, took a gulp of her scotch, and lit a cigarette. At the other end of the table, Dad mirrored her perfectly. The boom of my father’s voice surprised me.

“What in God’s name are you talking about? Sweden? Sweden is a socialist country. One of the worst in the world.”

I sat there. My heart beat in my throat.

“Say something!” he shouted.

“Now you do. Tomorrow you’ll tell your teacher.”

For the next hour, I sat while Mother and Dad re-educated me with the “correct” information about socialist Sweden. I was sent to school with the notes my parents had written and clear instruction to tell my teacher exactly what they had told me.

My teacher was not amused when I read my parents’ notes to the class. “You dare talk back to me,” Sister screamed as she slapped my face. “Go home now and don’t return until you can be polite.”

That day, I was sure I’d get sympathy from my parents. Instead, Mother and Dad insisted I continue to speak up in class. “Please, don’t make me,” I begged.

“You’ll obey your parents or answer to me,” my father said. “It’s time you learned to stand up for the truth.”

I Was the Brainwashed 12-year-old

My parents loved to describe this incident to their right-wing associates. Dad usually introduced me and then explained how their “brainwashed” twelve-year-old daughter had awakened them to the dangers lurking in schools, even Catholic ones. It was not unusual for Dad’s friends to pat me on the back and congratulate me for having parents who cared enough to teach me the truth.

When I was in college, I did discover that my seventh-grade textbook had been correct about the electrification of Swedish farms: over 50 percent had electricity in 1930 compared to 13 percent in the Midwest and 3 percent in the South.

I gradually came to understand that facts never changed my parents’ minds; they believed that socialist Europe was too bureaucratic and too anti–free enterprise to best the United States in anything. Their reasoning demanded that those socialist farms could never have had electricity before American farms did.

That was that. Facts be damned.

After the Sweden debacle, my brother coached me on ways to avoid parental booby traps. “You’re telling me to lie,” I complained. “I’m not good at lying.”

“You’re not exactly lying,” he explained. “You’re telling them what they want to hear.”

I was catching it on both fronts—home and school—until a miracle happened. After Easter vacation, Sister Mary Austin was gone. “Sister was ill and needed rest,” we were told. No adult ever said another word about her. But I didn’t care. My tormentor was gone; I had a reprieve on the school front. On the home front, no so much.

Teachers like the one who terrorized my class worked in schools all over Chicago and all around the country. It was many years later that the Catholic Church recognized the abuse being perpetrated on children and took a few tiny steps to correct it. The larger scandal of sexual abuse in the Roman Catholic Church would not be revealed for decades.

My teacher’s disappearance did not slow my mother at all; she ramped up her textbook wars until she was fighting with the entire Catholic school system of Chicago. In meeting after meeting with administrators who oversaw school policy, she presented detailed lists of the errors and omissions she’d documented in the textbooks.

Mother’s objections were similar to those arising in other parts of the country. At first, she stressed the misinterpretation of American history. Later, she branched out into broad attacks on the entire curriculum.

Before long, no one in school was happy to see my mother. No matter, she refused to compromise or stand down. “I’m doing it for the children,” she said.

Ironically, as my mother devoted more and more time to save “the children,” she had less and less time for her children. This seeming contradiction did not trouble her in any way. She believed that God had set her path, and she followed His will. “Saving the country trumps fun and games,” she said without apology.

My mother continued her personal crusade against the errors in textbooks for decades. Just in case anyone thinks the textbook battles have eased, here’s the last section of “Textbook Wars.”

Forty-plus years after Mother dove into the textbook wars, I sat on a five gallon bucket in my parents’ basement, sorting a mountain of old papers. “They saved everything,” I complained to the silverfish scurrying along the damp floor. “I’ll be here for a month of Sundays.

Black-metal file cabinets lined three of the walls. Books, magazines, and pamphlets littered rows of shelves. In the corner, a tall stack of hard-cover books leaned against the wall. The jumble spilled over into piles on the floor. All around me was the debris of my parents’ long fight against all things liberal.

My brother Jay R. had already made arrangements for our parents’ extensive library of conservative books, personal correspondence, and writings to be donated to a Catholic library in Virginia. I was left with the stuff no one wanted.

All afternoon I filled boxes. I found index cards, covered with Mother’s nearly illegible scrawl, stuck out of the pages of old textbooks—remnants of her crusade.

I took a moment to remember my mother as she marched down the hall to confront the authorities about the errors in the books. How I wished she’d just go home and bake cookies like other mothers did. Of course, my mother never did. She moved from project to project and issue to issue for almost fifty years. Right to the end, she was a formidable crusader for everything right-wing.

I dragged boxes to the corner and stuffed books inside. The next day was trash pickup; all of this stuff was headed to the dump. While those books went to the trash compactor, Mother’s ideas were being rescued from the dustbin of history.

In 2010, the Texas Board of Education adopted curriculum standards that were as far to the right as anything ever imagined for public schools. My mother, Phyllis Schlafly, and Mel and Norma Gabler—along with two generations of John Birchers and religious fundamentalists—were reemerging on the winning side of the textbook battles.

Some of the curriculum changes to Texas’s books defy fact; others delete important historical figures and erase events from the timeline of American history. Still others diminish the importance of the civil rights movement while praising states’ rights ad infinitum.

Today’s students in public schools across the country are in danger of learning Creationism alongside evolution. Sex education is relegated to abstinence-only instruction, and contemporary history is a right-wing romp praising the likes of Joe McCarthy and Phyllis Schlafly herself.

Everything in the textbook controversies points to one conclusion: Mother’s personal battles ended with her passing, but the textbook wars never die.