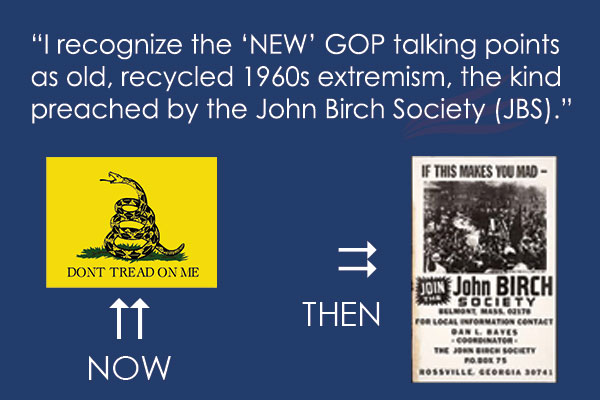 I’ve spent a lot of time connecting the dots between old right-wing radicals, particularly John Birch Society radicals and today’s new radicals in the Republican party. At first, I felt like I was the only one who realized that the GOP absorbed so much Birch thought that they had become nearly identical twins. The GOP doesn’t like the comparison. The older establishment Republican types remember when the Birchers became such an embarrassment that they had to call out William F. Buckley, Jr., the conservative movement’s exalted leader, to banish the Birchers to the radical fringe.

The old-timers may not like to be compared to radical right-wingers, but that doesn’t change the facts. Today’s GOP sounds like, looks like, and talks like old radicals. I’m not alone in figuring this out. Here’s Rachel Maddow in 2009) talking about the John Birch Society being ushered onto the GOP stage.