Let me introduce you to the Koch Brothers and their father, Fred, infamous John Birch Society founding member.

This video is an outtake from my interview with Jen Senko, documentary filmmaker. Her new film, “The Brainwashing of My Dad” premieres on March 18, 2016. It is impossible to understand where the radical right got its mojo without knowing the Kochs. David and Charles are the architects of a vast right-wing network that’s working to turn America into their vision of a libertarian-infused, far right-wing country.

For the last five years, Jane Mayer has been investigating the Kochs and their vast web of political organizations. She’s explored in depth how they made their money, how they spend their money supporting radical right-wing causes, and what they plan to accomplish.

In her ground-breaking article for the New Yorker, “Covert Operations: The billionaire brothers who are waging a war against Obama, Mayer described the political philosophy of the Kochs:

“The Kochs are longtime libertarians who believe in drastically lower personal and corporate taxes, minimal social services for the needy, and much less oversight of industry—especially environmental regulation. These views dovetail with the brothers’ corporate interests. In a study released this spring, the University of Massachusetts at Amherst’s Political Economy Research Institute named Koch Industries one of the top ten air polluters in the United States.

And Greenpeace issued a report identifying the company as a “kingpin of climate science denial.” The report showed that, from 2005 to 2008, the Kochs vastly outdid ExxonMobil in giving money to organizations fighting legislation related to climate change, underwriting a huge network of foundations, think tanks, and political front groups. Indeed, the brothers have funded opposition campaigns against so many Obama Administration policies—from health-care reform to the economic-stimulus program—that, in political circles, their ideological network is known as the Kochtopus.

Dark Money: The Hidden History of the Billionaires Behind the Rise of the Radical Right

This year, Jane Mayer published her new book, a deep dive into the money that’s fueled the radical right. In her book, she explores the influence of the Koch Brothers and several other billionaires who have spent fortunes trying to turn America into a libertarian “utopia” with a tiny government, no taxes, and no regulation.
The network has brought together some of the richest people on the planet.

Their core beliefs—that taxes are a form of tyranny; that government oversight of business is an assault on freedom—are sincerely held. But these beliefs also advance their personal and corporate interests: Many of their companies have run afoul of federal pollution, worker safety, securities, and tax laws.
The chief figures in the network are Charles and David Koch, whose father made his fortune in part by building oil refineries in Stalin’s Russia and Hitler’s Germany. The patriarch later was a founding member of the John Birch Society, whose politics were so radical it believed Dwight Eisenhower was a communist. The brothers were schooled in a political philosophy that asserted the only role of government is to provide security and to enforce property rights.
When libertarian ideas proved decidedly unpopular with voters, the Koch brothers and their allies chose another path. If they pooled their vast resources, they could fund an interlocking array of organizations that could work in tandem to influence and ultimately control academic institutions, think tanks, the courts, statehouses, Congress, and, they hoped, the presidency.
These organizations were given innocuous names such as Americans for Prosperity. Funding sources were hidden whenever possible. This process reached its apotheosis with the allegedly populist Tea Party movement, abetted mightily by the Citizens United decision—a case conceived of by legal advocates funded by the network.
The political operatives the network employs are disciplined, smart, and at times ruthless. Mayer documents instances in which people affiliated with these groups hired private detectives to impugn whistle-blowers, journalists, and even government investigators. And their efforts have been remarkably successful. Libertarian views on taxes and regulation, once far outside the mainstream and still rejected by most Americans, are ascendant in the majority of state governments, the Supreme Court, and Congress. Meaningful environmental, labor, finance, and tax reforms have been stymied. 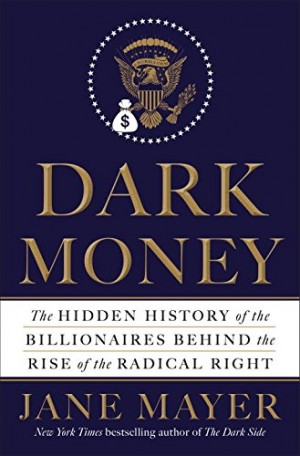