You are here: Home / Fox News / No Merry in Christmas Again This Year 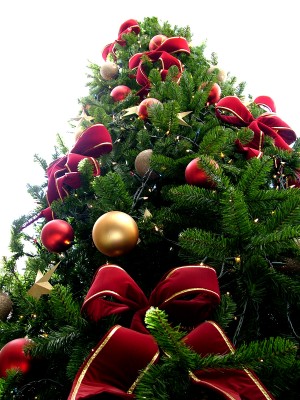 Wake up, Americans! There’s a plot to take the “Merry” out of “Merry Christmas”

Bill O’Reilly and his right-wing pals are beating the War on Christmas Drum, again. FOX audiences are reminded, almost daily from early November on that secular humanists, atheists, and other no-goodniks are plotting to kill Christmas.

I laugh when I hear these dire warnings of the demise of America’s favorite shopping season. Can you even imagine the consequences if those secular warriors actually kill Christmas? What would we do without Baby Jesus birthday cakes, red-nosed reindeer, and mall Santas!

The crusade to save Christmas began way back in 1959 when the John Birch Society went to battle against the first modern perpetrators of the War on Christmas.

I personally experienced this fight as my parents were John Birch Society members #1 and #2 in Chicago. When they joined the society, they embraced it with everything they had—including their daughter (me). Along with the rest of the new Birch army of super-patriots, I signed petitions, wrote letters, and attended Birch meetings. My father was a national Birch leader, so meetings went on in our living room almost every night.

One of the first projects the fledgling John Birch Society embraced was a national petition drive to stop the planned summit meeting between President Dwight Eisenhower and Soviet premier, Nikita Khrushchev. This was the focus of every Birch meeting and every Birch member.

Stop the United Nations and Save Christmas

One Saturday, Mother called me into the dining room. On the table, piles of pamphlet, letters, envelopes, and stamps waited. Mother scurried around checking the supplies. She stopped for a sip of cold tea and looked at me.

“The United Nations,” she told me.

According to mother, the John Birch Society had uncovered a plot to replace the Baby Jesus with an international celebration of brotherhood. Before anyone was the wiser, traditional Christmas ornaments and trees would be replaced with United Nations insignia and flags.

“The Christmas tree at Marshall Field will be no more,” Mother said.

To thwart this assault on our Savior’s birthday, the Birch Society had published “There Goes Christmas.”

I was put to work on the booklet assembly line and stuffed “There Goes Christmas” into envelopes addressed to a slew of folks. Everyone from our family Christmas-card list to the members of the local country club was sent a copy. By the time the project was over, I swore everyone in Chicago must have received one.

The United Nations did not take over Christmas that year. Marshall Field Department store in downtown Chicago had a glorious seven-story, traditionally decorated Christmas tree. Store clerks wished their customers “Merry Christmas.” Carols played, packages were tied up in bows and piled under trees. Little girls longed for a new Betsy Wetsy with her steamer trunk of accessories. Boys dreamed of their own Bat Masterson costume with a special place for a new cap gun. Grown-ups (and a few daring high schoolers) toasted the season with Canadian Club and Old Crow-spiked eggnog. It was a grand time.

While the John Birch Society claimed victory in this first battle for Christmas, they knew that the war was not won. That would take decades of effort.

Today, a new brigade of Christmas protectors have taken up the fight. Before the Thanksgiving left-overs are cold and the midnight shoppers are storming into Walmart , the FOX news gang is on full alert. This is, most certainly, the year that the left-wing Grinch will finally steal Christmas. If it’s December, the right goes crazy because a public school did not include “Silent Night” in the Christmas program or a city opted to skip the nativity scene in front of city hall.

In a presidential election season, one Republican candidate after another defends Christmas with every fiber of their being. These Republicans know that failing to declare “Merry Christmas” as the only allowable holiday greeting, puts their political career in extreme jeopardy. They can’t take a risk with the ever-vigilant right-wing Christmas police.

The 2015 War on Christmas got off to a rip-roaring start when Christians discovered that Starbucks’ Christmas cup features the green Starbucks logo on a plain red cup. The outrage machine was fueled by one Christian minister who said, “Starbucks REMOVED CHRISTMAS from their cups because they hate Jesus.” Apparently, this guy equates snowflakes with Jesus. To be clear, Starbucks has never had religious Christmas symbols on their cups. But, hey, who cares about reality when there is a war to fight? 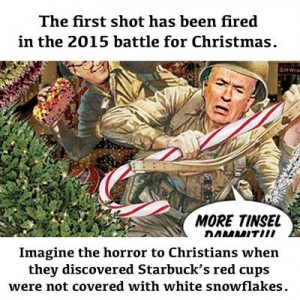 Meanwhile, the merchandising machine goes merrily along raking in the Christmas profits.  For two months, America is consumed by shopping and shopping and more shopping. And just to be sure that not a penny is left unspent, December 26th ushers in After Christmas shopping.

Be honest: there is no relationship between our Christmas gift-o-rama and the birth of Jesus

But, never mind. While the war rages on, you have to be careful out there, Here’s a hint: you can tell the forces of the anti-Christmas are winning when a clerk at Target wishes you “Happy Holidays.”

More about the War on Christmas and some of the history of Christmas . . .

Savannah Cox looks at the history of Christmas and why is was banned by the Puritans in this article.

Daniel Denvinre writes a “Short History of the War on Christmas” in Politico. He takes the war right back to the John Birch Society.

I am a right-wing survivor. Thanks to my radical parents, I became a first-hand, in-the-room witness to the fear, paranoia, and hate unleashed by the radical John Birch Society. Over years, this perspective helped … END_OF_DOCUMENT_TOKEN_TO_BE_REPLACED

The president of the United States is an angry man. No matter how much money he has; how much power he grabs; or how many people kowtow before him, he's a blink from a … END_OF_DOCUMENT_TOKEN_TO_BE_REPLACED

Readers, Writers, and Commentators rave about Claire Conner and Wrapped in the Flag "Claire Conner knows of what she speaks. She was … END_OF_DOCUMENT_TOKEN_TO_BE_REPLACED

Don't miss The Brainwashing of My Dad by Jen Senko, now in theatres and on … END_OF_DOCUMENT_TOKEN_TO_BE_REPLACED