You are here: Home / 1% / The Koch Brothers and Their Infamous John-Birch-Society Dad

The Kochs call themselves free-market, libertarian-infused conservatives. A quick translation of that wonky jargon means that most of us will not prosper in Kochs’ version  of America. 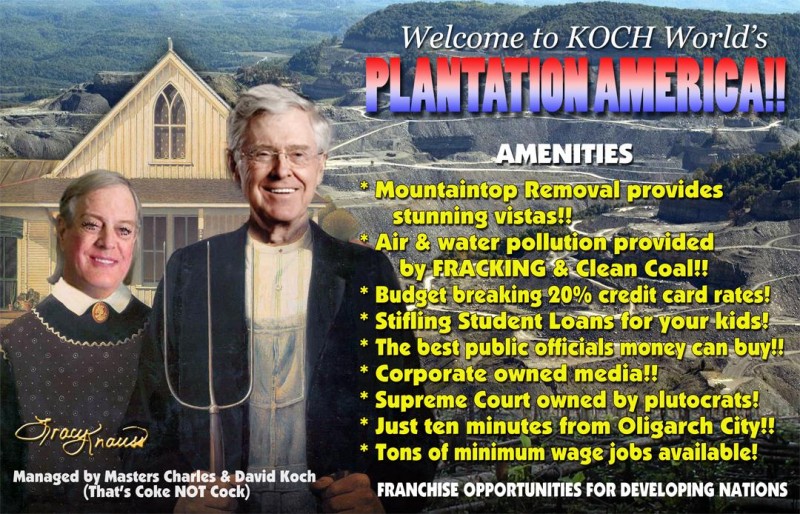 Most John Birch Society leaders are buried deep in the recesses of American history, known only to politics junkies, history wonks and me, a Birch kid.

There is one exception however, a Birch name that echoes across today’s political landscape: Fred C. Koch, founding member and national council member. Before Koch’s sons―David and Charles―became synonymous with corporate political power, Koch built a fortune from an oil drilling techniques he developed. But it didn’t happen immediately. In the early days, oil companies in the United States were not interested in Koch’s new methods. Fred looked elsewhere for contracts that would keep his fledgling company in business.

In 1929, he landed a $5,000,000 contract for his company to build fifteen oil refineries in Russia, Joseph Stalin’s Communist Russia.

Koch supervised the refinery installations, traveling extensively across the country over three years. He claimed that his hatred for Communism grew out of his Russian experiences, but he had pocketed $500,000 (his part of the company’s profits) before his outrage set in. That money, $8,000,000 in today’s dollars made Fred Koch a very rich man.

But Stalin was not the only totalitarian dictator Fred Koch supported. During the 1930s, Fred’s company, Winkler-Koch Engineering planned and oversaw the construction of a huge oil refinery in Hamburg, Germany. This facility became essential to the Nazi War Machine. (details in Dark Money by Jane Mayer, Chapter One: Radicals: A Koch Family History)

According to Jane Mayer, “Fred Koch’s willingness to work with the Soviets and the Nazis was a major factor in creating the Koch family’s early fortune.” (Dark Money p. 31) This history is certainly not the image of “free enterprise” and an “unfettered free market” that the Kochs defend.

In 1960, thirty years after he took Communist and Nazi money and parleyed it into an even bigger fortune, Koch wrote his book, A Businessman Looks at Communism, in which he rails against labor unions and the Civil Rights Movement as part of the Communist plot to take over America. 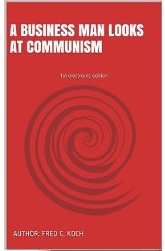 “Labor Unions have long been a Communist goal,” Koch wrote. “The effort is frequently made to have the worker do as little as possible for the money he receives. This practice alone can destroy our country.” (p. 16)

My father, Stillwell J Conner, who served on the John Birch Society National Council with Fred Koch, had identical views on labor unions. As long as there is breath in my body,” Dad vowed, “there will never be a union in my company. I’ll board it up first. Fred (Koch) sees it like I do, one hundred percent.”

Koch was equally damning views of civil rights. “The colored man looms large in the Communist plan to take over America,” he said (p. 25) and “it will use the colored people by getting a vicious race war started.”

Koch’s views on civil rights were identical to those of the John Birch Society. Early in the civil rights movement, the Birch founder labeled Dr. Martin Luther King a Communist and marshaled the Birch leadership to fight every piece of civil rights legislation.

Fred Koch died in 1967, leaving his company and his vast fortune to his four sons: Freddie, Charles, David and Bill who spent the next twenty years battling over the estate.  Eventually, David and Charles emerged with control over Koch Industries, one of the largest privately-held corporations in the country.

The sons acquired dozens of companies and diversified their fossil fuel assets into every commodity from silicon chips to toilet paper. Koch Industries continues to build its corporate wealth (and the Koch brothers’ personal wealth) with government contracts and government tax breaks.

Like their father, the Koch Brothers have no problem doing business with enemies of the United States. Koch Industries subsidiaries have engaged in very profitable business with Iran–despite federal sanctions against such trade.

The Koch brothers have enormous personal fortunes, somewhere around $40 billion dollars each in net worth. They are investing hundreds of millions of dollars in their favorite causes, right-wing, libertarian, anti-government ones. David identified himself as the wallet behind Americans for Prosperity, the big umbrella for Freedom Works and the Tea Party. Charles founded the Cato Institute, a powerful think-tank specializing in selling right-wing policies on everything from taxes to entitlements.

Let’s not kid ourselves about the radical ideas that the Koch Brothers are selling. Despite their contributions to cultural organizations including the ballet, museums, and the opera, the Kochs have a burning desire to dismantle a large portion of the structures of the United States. They were taught to dislike the government by their father. Charles expanded the dislike into hate.

Brian Doherty, who chronicled the rise of American libertarianism in his book Radicals for Capitalism, interviewed Charles Koch. Charles made no secret of his political aim : “tear the government out at the root.” An unpublished history of the Koch family, written by Clayton Coppin and accessed by Jane Mayer for her book, Dark Money, looked at Koch’s hatred of the government. According to Coppin, Charles was “driven by some deeper urge to smash the one thing left in the world that could discipline him: the government.” (Mayer, pp 53-55)

Following in the footsteps of their father and the John Birch Society, David and Charles Koch are spending huge amounts of money to turn the United States into a country with a pint-sized federal government and none of the expenses of Social Security, Medicare, Medicaid or any other social program. Oh, and very low taxes, especially for rich billionaires like them.

This libertarian utopia would free businesses to make a profit unrestrained by regulation. Corporate taxes and taxes on the rich would be tiny, allowing vast accumulations of wealth for the wealthy. Workers incomes would be set by corporations without the requirements of minimum wages and union scale.

The ultimate irony of the Koch Brothers is this: they are spending hundreds of millions of dollars to wreck the country that helped make them so fabulously wealthy.

I talk in detail about the Kochs and their plans for America in an interview with Jen Senko for her new documentary, “The Brainwashing of My Dad,” premiering in March 2016. Click the arrow below:

Check these books out for much, much more

I am a right-wing survivor. Thanks to my radical parents, I became a first-hand, in-the-room witness to the fear, paranoia, and hate unleashed by the radical John Birch Society. Over years, this perspective helped … END_OF_DOCUMENT_TOKEN_TO_BE_REPLACED

The president of the United States is an angry man. No matter how much money he has; how much power he grabs; or how many people kowtow before him, he's a blink from a … END_OF_DOCUMENT_TOKEN_TO_BE_REPLACED

Readers, Writers, and Commentators rave about Claire Conner and Wrapped in the Flag "Claire Conner knows of what she speaks. She was … END_OF_DOCUMENT_TOKEN_TO_BE_REPLACED

Don't miss The Brainwashing of My Dad by Jen Senko, now in theatres and on … END_OF_DOCUMENT_TOKEN_TO_BE_REPLACED